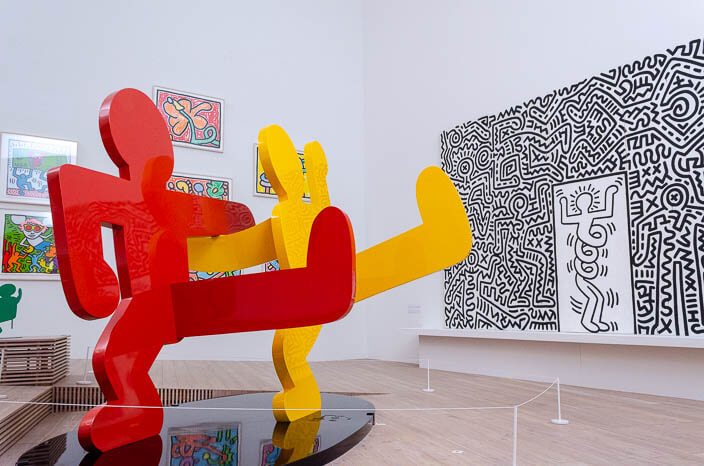 You might be surprised to know the only museum in the world dedicated to Keith Haring – one of the 1980’s legendary pop artist – is actually located in Japan and not even in Tokyo, but in the remote area of Kobuchizawa, in Yamanashi Prefecture.

Keith Haring (1958-1990) was artist and the most legendary figures of the 1980’s pop art scene with Andy Warhol and Jean-Michel Basquiat. In 1980, he started drawing spontaneously on an unused billboard in a subway station in New York City – “Subway Drawings” became a hot topic of conversation among commuters in New York, and his name became well known.

Keith Haring’s works are often socially and politically oriented, such as “AIDS prevention awareness,” “LGBT recognition,” “anti-apartheid,” and “nuclear abandonment”, which is probably due in large part to the fact that he himself was a homosexual and AIDS-infected minority.

He also established the Keith Haring Foundation, which provides funds to charities that raise awareness of HIV and AIDS among underprivileged children, and he was active in the fight against AIDS by sending out messages to prevent HIV infection through his works. He himself ended his life at the age of 31 due to complications from AIDS.

Built in 2007 at the foot of the Yatsugatake Mountains in Yamanashi Prefecture, the Keith Haring Museum of Art is the only Keith Haring Museum in the world, a one-of-a-kind space where visitors can enjoy approximately 300 works of art that the founder and director, Kazuo Nakamura, has collected since 1987.

The Nakamura Keith Haring Collection was designed by Atsushi Kitagawara based on the concept of both “light & darkness” and “chaos & hope”, reflecting the turbulent state of the time when Haring lived. Here is the place where we can feel “life and death” and “people’s secret madness” through Haring’s works. In 2015, an exhibition space was added, that encompasses the Zen philosophy of “living by sensibility alone, away from thought”.

At the end of the corridor leading into the exhibition room is a neon sign that reads “Radiant Baby”. This is one of the motifs that Haring often used, and it has also become his symbol.

After looking at Radiant Baby, I arrived in the “Room of Darkness“. The outline of the exhibition is clear and Haring-like, but the works are different from what you would expect. This room displays Keith Haring’s early works, symbolizing the shadows of America in the 1980s (worsening inflation, economic turmoil, deteriorating security) and the shadows of his works (human madness).

Further on, I reached the “Gallery of Glowing“. The bold outlines and bright colors were just like Keith Haring envisioned, and I was somewhat relieved to feel like I had escaped the darkness.

Next is the main room “Room of Hope“. This room symbolizes the “hope” and “dream” in Keith Haring’s works. In contrast to the dark exhibition room, the entire room is filled with bright light, and it is a moment to experience the museum’s theme, “both light and darkness” and “chaos and hope”.

Next to the museum is the Hotel Key Forest Hokuto, which was designed by the same designer as the museum, Atsushi Kitagawara. The theme of this building is “harmony between nature and art”. The area around Yamanashi Prefecture flourished as the center of Japan in the mid-Jomon period (BC 3,000 – BC 2,000), and the architectural design was inspired by the Jomon culture. Each of the six guest rooms is named with words that were used in the Jomon period and each room has different furniture and lighting… You can find a room that you like and stay there.

Before visiting the Nakamura Keith Haring Collection, my image of Keith Haring was just “pop and fun” from his colorful and happy works but it completely changed after visiting: I was exposed to Keith Haring’s social and political issues through his works, and it made me think for myself. I was able to think in this way only because this museum was founded with great respect and love for Haring’s work. It’s also wonderful that the museum is involved in activities to carry on Haring’s legacy, such as HIV and AIDS prevention awareness events, international painting contests and disaster fundraising. The museum is located in a place that is not easily accessible, but if you have a chance, I highly recommend paying a visit.