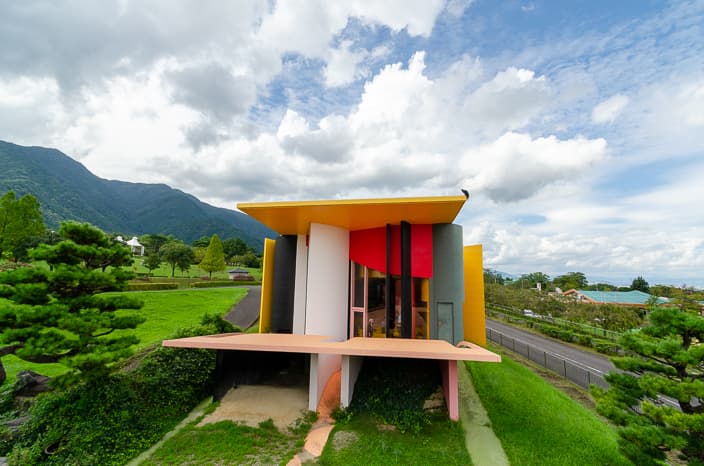 Do you know the “Site of Reversible Destiny”?

It is a park in Yoro, Gifu prefecture and said to be the “most unusual park in Japan”.

Some of you may have seen pictures of it on social media. I am one of those people who learned about this park through SNS and became interested in it, so I ended up visiting it myself!

In this article, I would like to introduce the attraction of the Site of Reversible Destiny with my own impressions.

The Site of Reversible Destiny is an Art & Architecture project opened in 1995 by world-renowned artist/architect Shusaku Arakawa and his partner Madeline Gins.

The Reversal of Destiny is a form of art that Arakawa and Gins have been pursuing for a long time. After years of research, they came to the conclusion that we should transform our future into a hopeful one by utilizing the infinite potential of our bodies.

The Site of Reversible Destiny is the embodiment of their idea : Reversing fate toward death and life given to us by God, in other words, “natural destiny” rather than our own will. It is an experimental work to demonstrate this, and the theme here, is to create another new Self by reawakening the instincts and five senses that are dormant in humans.

Let’s take a look at what kind of architecture awakens the senses !

But first, let’s have a look at the map and rules…

Parallel and perpendicular lines are eliminated as much as possible in the Site of Reversible Destiny, and many artificial horizons are created to confuse your sense of balance and perspective. The ground also has steep slopes and rugged footholds, and we often feel like we will fall if we don’t have our hands on the walls. This is supposed to take us back to our waddling childhood and make us reconstruct our perception as if we were just beginning to know the world for the first time.

At any rate, it is a very difficult place to walk, so I recommend wearing comfortable sneakers when you visit.
I wore sandals that were easy to walk in, but the soles were a little thick and I was quite scared at times.

The first thing you see when you enter is the colorful and vibrant “Reversible Destiny office”.

The building was completed in 1997, two years after the opening and was originally used as the office of Site of Reversible Destiny.

The colorful, maze-like building looked like a fun place for children to move around.

In fact, the floor and ceiling here are twins. Therefore, even if you turn the ceiling and floor over, the view will not change. You can even take pictures like this, looking like you’re about to fall from the ceiling.

After leaving the “Reversible Destiny office,” you will come to a place where rugged rocks are piled up to form a mountain. This is the “Insect Mountain Range”. This rocky mountain range can be climbed, and at the top there is a water pump (similar to the well Satsuki and Mei draw water from, in the animation movie, My Neighbor Totoro).

Water actually comes out of the pump, which is very nice, and people who climb the mountain in search of water are said to look like insects from afar.

There are two main pavilions in this park, and this is one of them, the “Critical Resemblance House”.

When I entered, I found a bed, a sofa, and a gas stove all set up, penetrating the walls. When you look at the ceiling, you can see that the furniture has been installed in the same way again, which is just unusual. The floor is curved and the width of the passageway is never constant, and you feel like you are in a house, but it is not a house, and you don’t know where you are.

After passing through the “Critical Resemblance House,” we came to this path. As we walked, there were many pathes branching out, each with its own name : “The Way That Doesn’t Disappear,” “The Way But Not Yet,” “Any Way,” and “The Way Not to Die”.

Of these, only one leads to the wall in the center of the photo. Now, which path will you choose?

This is the view when you come up the steep slope at the end of the road. Nearby is the “Exactitude Ridge”.

At this building, you can take pictures that defy gravity, which is popular on social media!

I was already too tired to do so at this point, but I wish I had taken one too.

The intention is to draw out the perceptual confusion by encountering the same kind of buildings again and again.

The pamphlet also has various guidelines on how to think and act in this pavilion, but I didn’t actually go to this pavilion, so I came back without knowing what it was actually like.

Why I didn’t enter the “Elliptical Field”…the reason is the “Kinesthetic Path”. 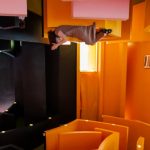 We walked along the path just before entering the mortar like this, which was an “Kinesthetic Path” and a great way to get rid of the lack of daily exercise.

At first, I could see the path around me, but it soon turned into a path with walls taller than my height towering on both sides. I couldn’t see much further, and I didn’t know how much further the path would take me. The path was wide enough for a single person to walk on, but if there were people passing each other, one of them would have to stick to the wall horizontally to pass the other. Therefore, it takes quite a while to move on. After a few tens of minutes of walking (or maybe a dozen), we finally arrived at the destination, and this is the view we saw! Ta-da!

Yeah! Nice view! Nature feels good~! It feels good…but it’s a dead end! What, do I have to go back this way? I felt a little desperate. By the time we came back to the original place, we were so exhausted that we said, “Let’s go home”.

The uneven flooring of the kinesthetic path made it difficult to walk on, and I was exhausted and drained, but for some reason, my heart was so full that I felt like I had worked up a good sweat from the bottom of my heart.

I am sure that if you are more athletic than I am, you will enjoy both the “kinesthetic path” and the “Elliptical field,” so enjoy them both.

I am not sure if another new me was born as the author intended, in the “Site of Reversible Destiny” where the foothold was bad from beginning to end and I had to tread hard to walk. However, I feel that various senses were at work, such as feeling bewildered by the sensations that I cannot usually feel, and feeling a sense of accomplishment by conquering them.

I hope you have a chance to try and Reverse Your Own Destiny !