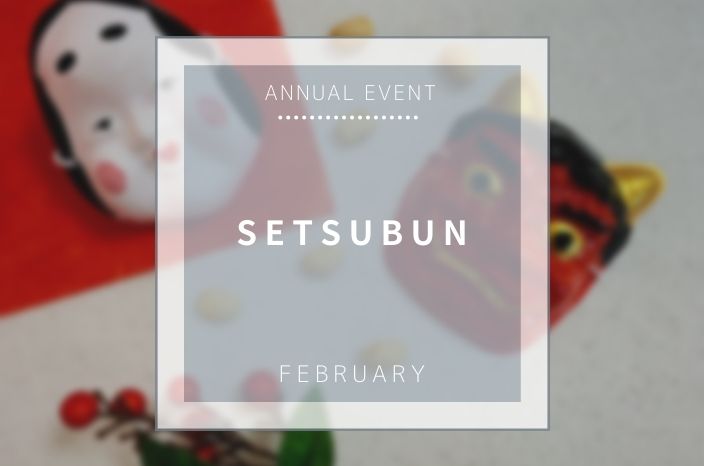 Speaking of Japanese culture, in February is “Setsubun”. On this blogpost, I’d like to introduce you about Setsubun.

The word Setsubun means “separate the seasons”. In the past, the day before the beginning of each season (Risshun [spring], Rikka [summer], Risshu [autumn], Ritto [winter]) was called “Setsubun”.

However, since the Edo period, it has become only for the day before “Risshun [spring]”. It is said that this happened because spring was especially important as the beginning of the year. April (Spring) is the start of the new school year in the Japanese school system and many employees start a new job in April. It’s also the time when rice is planted and the new growing cycle starts. As you can see, Spring is the beginning of the year in Japan.

In the olden days, it was thought that seasonal breaks, especially year breaks, were prone to wickedness, and various wickednesses were dispelled. Even now, Setsubun is an event that is held agains evil spirit.

A custom of Setsubun is “Mame-maki”. People throw roasted soy beans inside and outside their houses while shouting ”Devils, Get Out of the House! Invite Happiness into the Home!”.

Devil often appear in old stories as a symbol of bad things : evil, illness, hunger, and disasters are the work of devils…

In order to get rid of the evil, people throw beans, that are said to contain the spiritual power of grains. Beans are considered to be good, but it is said that bad things will happen if the beans that have been contaminated (spoiled beans), so be sure to use roasted beans.

When I was little, my father wore a devil mask and played the role of a devil, so I threw beans at him powerfully.
(It’s hard to be a Father sometimes! LOL)

In 2021 (Last year), my daughter also said that she made a devil mask at the nursery school and sprinkled beans on it.
She is still in the 1-year-old class, so he threw a ball instead of beans (to prevent accidental ingestion).

The beans used for Mame-maki are called “Fuku beans”, and after sowing & growing the beans, we harvest & eat these Fuku beans. This is a wish for a year without illness, and we are supposed to eat as many as the number of years, so this time, it will be twenty-two ! !

In addition to Mame-maki, eating Eho-maki has become an annual event of Setsubun in recent years. Originally it was a custom of the Kansai region, but it has spread all over the country, when Eho-maki began to be at convenience stores on a large scale.

Eho-maki is a thick sushi roll which is believed to bring good fortune if eaten while facing the year’s “Eho” (good luck direction). The points when eating are “without cutting” and “silence”.

If you come to Japan around Setsubun, why don’t you look for Eho-maki at supermarkets and convenience stores?