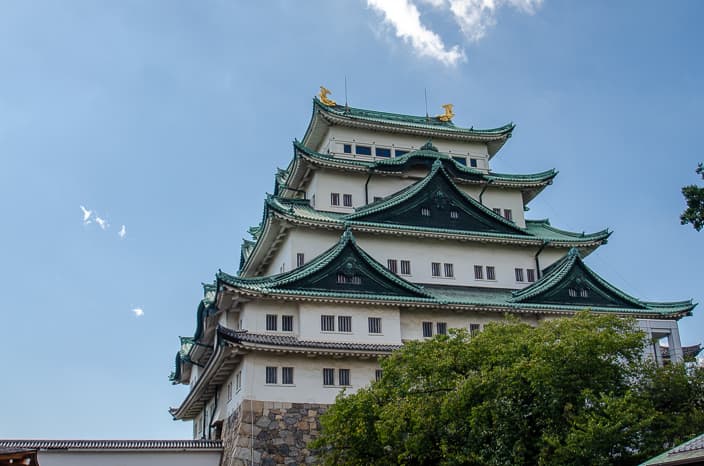 When it asked about Nagoya’s famous landmarks, many people answer “Nagoya Castle” with its blue-green roof and gold ornaments (gold Shachihoko). This was proven in a survey conducted by the city of Nagoya (City Brand Image Survey), and both citizens of Nagoya and people from other cities answered that Nagoya Castle is the number one attraction and tourist resource in Nagoya. So, since I was going to Nagoya, I went to Nagoya Castle!

Before going, I bought a book – “Official Guidebook to Japan’s 100 Great Castles”. This book contains information on the 100 great castles and also includes a stamp book.

My plan was to use this as an opportunity to visit castles little by little, but since Hirosaki Castle (Aomori Prefecture), which I just visited recently, is also included in the 100 famous castles, it will be a long road to complete the list.

Moreover, although I bought a stamp book with great enthusiasm, I forgot to bring it with me to Nagoya Castle and ended up not being able to stamp it… (bummer).

And anyway, we couldn’t enter the castle because the castle tower is currently under restoration, so I guess you’ll have to come back after the restoration!

The Birth of Nagoya Castle

The Final Completion of Japanese Castles

It is said that the castle tower was built for only about 60 years, from the time of Azuchi Castle (no longer extant) built by Oda Nobunaga until the Edo period, when a peaceful era began. Although construction techniques for castle towers developed rapidly in an effort to build stronger castles in a time of war, no new castles larger than Nagoya Castle were ever built.

In the Edo period (1603-1868), it was forbidden to build castles because building or restoring new castles was seen as a sign of rebellion against the Tokugawa and could lead to their destruction. For this reason, Nagoya Castle, which was built by order of the Tokugawa, was the highest point of the era.

Nagoya Castle, designed by the master castle builder Kiyomasa Kato, is not only known to the world for its size and the prestige of the Tokugawa family, but also for its high level of defense. Like Kumamoto Castle, which was also built by Kiyomasa Kato, Nagoya Castle was an ironclad defense facility.

Nagoya Castle, which was designated as the first national treasure in 1929, was destroyed by fire in 1945 during World War II. Later, it was rebuilt in reinforced concrete and now, more than half a century later, it is facing problems of aging and earthquake resistance. We are still working hard to complete the restoration in December 2022.

In the case of Nagoya Castle, there is still a wealth of data (actual measurements of the Showa period, photographs of glass signboards, etc.) that were created before the castle was destroyed by fire in the war. The actual measurement map, which was precisely recorded and drafted based on these materials, was completed in 1952. The “Kinjo Onko Roku”, an encyclopedia of Nagoya Castle in the Edo period, has also survived, and Nagoya Castle is the only castle in Japan that can faithfully restore everything down to the metal fittings.

So, unfortunately, we couldn’t enter the castle tower this time, but we enjoyed the Honmaru Palace, whose restoration was completed in 2018.

After going under the main gate and walking a bit, there is a replica of the Kinshachi, Golden Tiger-Fish Roof Ornaments. A photographer will take your picture here, and if you like it, you can buy it. You can also buy a digital photo for 300 yen, so I did.

The shachihoko, which has a tiger face and a fish body, was displayed as a guardian deity to protect the castle from fire. There are other castles that display the shachihoko, but Nagoya Castle is the only one that has a golden shachihoko (Kinshachi). It is said that more than 200 kilograms of pure gold was used to make it. It must have greatly reduced the financial power of the feudal lords.

Walking straight from the Orca replica, you can see the blue-green-roofed castle tower and the southwest corner watchtower. Further straight ahead is the second front gate (Omote-Ninomon) that leads to the Honmaru Palace.

The Honmaru Palace was the residence of the lord of the Owari domain and the administrative office of the domain, and was completed in 1615 by order of Tokugawa Ieyasu. It was completed in 1615 by the order of Tokugawa Ieyasu. The Honmaru Palace of Nagoya Castle, along with the Ninomaru Palace of Nijo Castle, is said to be the “twin peaks of the samurai-style shoin-zukuri” and was designated as the first national treasure along with the castle tower in 1930.

It was destroyed by fire in an air raid during World War II, but many people wanted to see it restored, so restoration work began in 2009. After 10 years and 15 billion yen of work, the entire building was opened to the public on June 8, 2018. The restored building is of course new and shiny, but the construction method is based on the technology of the time. The materials, including hundreds of years old Kiso cypress, were used as much as possible.

The first thing you see when you start the tour, is this room with a picture of a tiger on it. This is the place where visitors to the Honmaru Palace would wait to have an audience with the feudal lord.

There are tigers painted on every surface that look as if they are about to move, making you nervous even while you are waiting…

At the time of its construction, this room was the place of highest prestige as a formal audience between the feudal lord and his guests and retainers.

The room with the pine tree at the back has a raised floor where Tokugawa Yoshinao (the first lord of the Owari domain) is said to have been seated.

In the Honmaru Palace, where gold is used in abundance and glittering, attention to detail is also evident, and one such detail is the nail coverings that hide the heads of protruding nails.

The shape of the nails varies depending on the location and style, but this one is called “Rokuyo-kugikakushi” because it is in the shape of six (roku) leaves.

This squirrel and grape ornament is displayed in several pieces in the hallway, but the motif is actually the same, but the patterns are all different.

The upper part of the Joraku-den, which was used by the Edo lords when they went to the capital, was decorated with glittering carved transoms, and I was convinced that this was the ultimate in luxury.

This is the waiting room of the samurai who entertained the lords of Edo. The walls are covered with gold leaf in a very prestigious manner, as it is a room for upper class samurai. The ceiling, however, is the lowest of all, and it’s interesting to see the difference in style between the rooms.

It was a huge mansion, and I imagine that it must have taken a lot of work just to move it around for the people who used it in those days. I am convinced that Nagoya Castle, the residence of the Tokugawa clan, was the reason for such a gorgeous palace, and I can’t help but wonder how big Edo Castle, the central institution of Japan during the Edo period, was. If you take a look at the grounds of the Imperial Palace, you will see that but it is still hard to imagine. Although it was a reconstruction, it was a valuable and interesting experience to be able to actually walk around and see the palace as it was back then.

The wooden castle tower of Nagoya Castle is scheduled to be completed in December 2022. The blue-green roof, which is one of the features of Nagoya Castle, is actually a color that has appeared due to rust. It is said that the restored roof will be reddish brown or black (it rusts and turns blue-green over time).