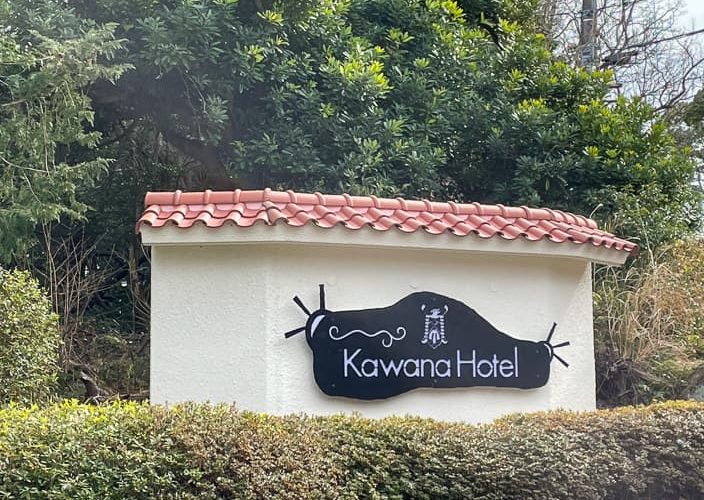 In 1936, at the request of the Japanese government, Kawana Hotel opened as Japan’s first internationally-oriented, English-style resort hotel. With a Golf course and a graceful hotel surrounded by the sea and greenery, it has become a longing hotel loved by many celebrities at home and abroad.

At the end of 2021, the Kanawa Hotel & Golf Course Oshima, as it is now called, celebrated its 85th Anniversary.

In addition to their long history, the two golf courses attached to the hotel, “Fuji Course” and “Oshima Course”, are both breathtakingly beautiful and highly strategic courses that make good use of the natural terrain and scenery.

Therefore, it is on the bucket-list of many golf lovers who wish to play there at least once in a lifetime.

“Kawana Hotel” was founded by Baron Kishichiro Okura, the second generation of the Okura zaibatsu (plutocrats), who left a big mark in the hotel industry, such as establishing “Hotel Okura”, showcasing the traditional beauty and hospitality of ancient Japan.

When on a visit to rest in Kawana, a land rich in nature and warm, Baron Kishichiro Okura dreamed of recreating the rich rural life of the aristocrats he had touched in England, so he purchased a vast land for ranch. However, it was a lava plateau where cows hurt their hoofs, and it was completely unsuitable for ranching.

Ging up on the ranch idea, Okura decided to take advantage of the scenic and varied land by building a golf course.

Designed by Komyo Otani, a golf tycoon, in an era when there were no heavy machinery, a large amount of soil dressing was manually applied to the lava plateau and turf was attached.

In 1928, the 18-hole par 68 “Oshima Course” opened as the first golf course in the Tokai region and Kawana’s history began.

Komyo Otani, Nishi Honganji’s Master’s son (one of the main and most famous Temples in Kyoto), started playing golf while he was studying in the UK, and after returning to Japan, made efforts to popularize golf, such as establishing the Japan Golf Association.

In addition to Kawana, he also designed the Tokyo Golf Club, etc., and is considered the ancestor of Japanese golf.

In the adjacent land, Okura then started the construction of the “Fuji Course” under the design of Rokuro Akaboshi, a designer who was popular at the time. Around that time in 1930, golf course design master also Charles Hugh Alison came to Japan to design the Tokyo Golf Club and Hirono Golf Club.

Allison was asked by Komyo Otani to revise the drawing of the Fuji course drawn by Akaboshi, and on his way to Kansai, he stopped by Kawana and was fascinated by its beauty.

Beyond the wavefront of Sagami Bay below, the magnificent landscape overlooking Izu Oshima, Miura Peninsula, Boso Peninsula, and Mt. Fuji, was a suitable stage for realizing Allison’s design philosophy.

The “Fuji Course” was completed in 1936 based on Allison’s drawings.

Along with the links course held at the British Open and the best Pebble Beach in the United States, which is said to have been created only by God, the Fuji Course has made a name for itself in the world. It is a famous course that represents Japan and continues to be selected as the best course ranking.

It is also famous as a stage for professional tournaments, having hosted the men’s Fuji Sankei Classic 24 times since 1981, and the popular women’s Fuji Sankei Ladies Classic since 2005, which has produced many famously tight matches and dramas.

This “Fuji Course” has already been introduced in the third installment of this blog, so this time I will introduce the “Oshima Course”, which can be said to be a senior.

Please read this about Fuji course

The “Oshima Course” is a classic and handmade course that has been open for 94 years. You can enjoy the feeling of a seaside resort where you can feel the sea breeze and the sound of the waves, just like on the “Fuji Course”.

Since it is a par 70, the distance is short, but the fairway is narrow and the ups and downs are tight.

There are holes along the valley crossing course and the cliffs of the coastline, so it is not an easy course at all !

The “Fuji Course” is a walking play with a caddy, so it can be physically challenging, however, on the other hand, the “Oshima Course” is a self-play 18 holes, using an electric cart with a navigation system that can enter the course. It’s much easier for people who are not confident in their physical strength.

Moreover, while the “Fuji Course” is exclusively for guests, the “Oshima Course” can be played by anyone, so you can enjoy Kawana comfortably !

The name seems to be given by impression and feeling, not by grounds or theory. For example, No. 3 along the sea is “Coastal Street”, No. 9 with pine forests on the left and right is “Tokaido” (the ancient walking route from Kyoto to Tokyo), and the straight & spacious No.17 is a nice and easy-to-understand name : “Champs-Elysées” !

On the other hand, there are also names that make you feel the horror on the course…

The 4th hole, which is famous for not returning the ball if you miss a tee shot, is “Good-Bye”.

The 6th hole crosses a swaying suspension bridge over a deep valley to a small green after a tee shot, so you will want to ask someone for help “SOS”, and the 16th hole with a valley in front of the tee ground is “Jigokudani” (Hell Valley).

There are some names I couldn’t understand, such as the 8th “Ochiudo mawari”(fugitive passed down oral tradition) and the 13th “VENI VIDI VICI” taken from Caesar’s story…

But the 18th hole in the final hole has a stylish yet outdated name : “Wife & Drink” (meaning… let’s have a drink with my wife, waiting for my hole out).

The “Oshima Course” is an 18-hole through play, but if you get hungry, there is a small cafe at the 10th hole.

The “Iso Ramen Noodle” that you can eat there is a specialty of the Oshima course, where you can enjoy the scent of the rocky shore with plenty of freshly picked seaweed. Warm noodle is especially nice when playing in the cold season.

Finally, I would like to introduce Kawana Hotel once again.

Baron Okura was impressed by the aristocrats enjoying golf, horse riding, tennis and swimming at the Gleneagles Hotel, a Scottish resort hotel that he visited while studying abroad. And after his return, he built a full-fledged English resort hotel here in Kawana.

It opened in 1936, and it was a noisy era when the February 26 Mandchurian Incident occurred and the footsteps of military boots echoed. During the Pacific War, the detention destinations of US and British embassies and naval hospitals were requisitioned, and after the war, they were requisitioned by the expeditionary forces.

Even after the requisition was lifted, it was not calm and was seized as collateral due to the bankruptcy of Okura Shoji, which was the core of the Okura conglomerate, but instead, the Seibu Group supported the reconstruction and is therefore, the hotel is now part of the Prince Hotel Group.

Please read this about Kawana Hotel

And now, to commemorate the 85th anniversary of the opening of Kawana Hotel, as a special plan that allows all hotel rooms to be reserved for 8.5 million yen has been prepared.

One night including the Imperial Suite Room, helicopter transfer from Tokyo allows you to make one round each on the “Fuji Course” and “Oshima Course”, and you can order as many food and drinks as you like, such as high-class French. What a dream-like plan! This plan can be applied by 2 to 8 people.

If you visit the historic Kawana by helicopter following a famous celebrity, rent out the entire prestigious hotel and enjoy golf, and fully enjoy authentic French cuisine and alcohol, you can truly enjoy the ultimate extraordinary luxury.

By the way, the catch phrase for the 85th anniversary was “Spinning a step in Baron’s dream.”