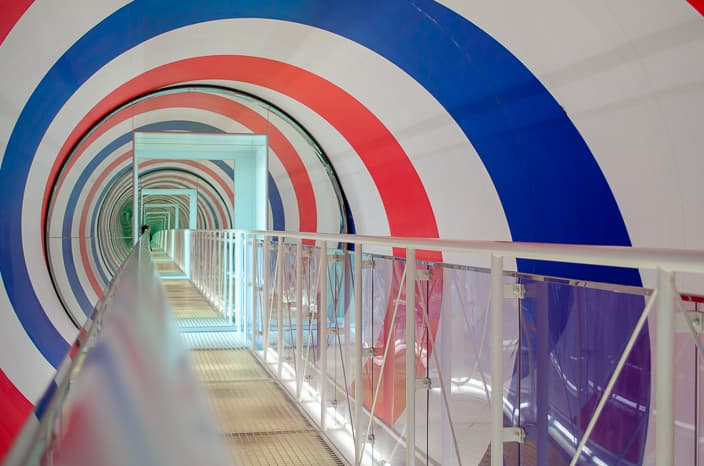 A Museum designed by the famous architect, Hiroshi Hara

This building was designed in 2003 by Hiroshi Hara, known for designing the Kyoto Station Building, and initially called “Echigo-Tsumari Exchange Center Kinale”. In 2012, it was renovated and reborn as “Echigo-Tsumari Satoyama Museum of Contemporary Art KINARE”. And in July 2021, it was re-opened as “Museum on Echigo-Tsumari”.

A pond is located in the center of the courtyard as the facility itself was created with the aim of having a spatial appeal and architectural characteristics that create the ability to attract customers.

Of course, I wanted to see the artworks on display, but as Mr. Hiroshi Hara aimed, I had a strong desire to see the building itself, which indeed was really attractive!

The bottom of the pond is a painting of an art work (Palimpsest: Sky Pond / Leandro Erlich), and you can see what it looks like from the second floor of the museum. (Admission ticket is required.)

You can go inside this pond, so I took off my shoes and went in. Fortunately it was sunny and I was happy to take these photogenic photos.

Enjoy artworks from all over the world

After enjoying the architecture itself, it’s finally time to go to the museum. You can see the works hanging from the ceiling before you enter.

GHOST SATELLITES / Gerda Steiner & Jörg Lenzlinger
It seems to be an artificial satellite made of various things collected in Echigo-Tsumari.

Now, let’s buy an admission ticket and see the permanent exhibition on the 2nd floor. Since it is a corridor type, you will come back to the same entrance at the end. Here are some of the works that left an impression on me.

Tunnel / Leandro Erlich
If you walk slowly toward the tunnel… you can take interesting pictures.

POWERLESS STRUCTURES, FIG.429 / Michael Elmgreen & Ingar Dragset
This art work aims to question “What is the role of the museum?” and the feeling of visitors to the Echigo-Tsumari Art Triennale.

Because I saw the artworks in the nature of Echigo Tsumari, I felt that I could understand what this work was trying to achieve.

Rolling Cylinder, 2012 / Carsten Höller
Although it is not visible in the photograph, this is a work in which the visitor works on a footbridge and the red, blue, and white colors rotate around you. I could feel quite a mysterious sensation.

There were many other interesting works. I only saw the permanent exhibition, but there are also special exhibitions held from time to time, so please enjoy it if you are interested and have enough time.

Take a break at the museum’s cafe

Next to the museum shop on the 2nd floor, there is a cafe called “Echigo Shina Cafe” and it is actually one of the art works.

○ in □ / Massimo Bartolini feat. Lorenzo Bini
This space is composed entirely of ○ (circles) and □ (squares). The sub-theme is the Shinano River, the longest river in Japan that flows through Niigata Prefecture. When all the Bar tables are connected, the Shinano River will appear.

Drinks and cakes are on sale, so you can take a break before or after visiting the museum. I came here without having lunch and thought “Finally, I can eat lunch”, but since there was no meal menu, I was a bit disappointed – haha.

I had a chiffon cake with rice flour gelato. (I’m sorry I forgot to take a photo.) It was delicious because it was gelato and at the same time, it was chewy because it used rice flour. You can choose from 3 different types of chiffon cake.

The Echigo-Tsumari Satoyama Museum of Contemporary Art KINARE is a very attractive place for the building itself and although the exhibition space is not that large, there are many interesting works, so I believe it’s a museum worth seeing.

This is one of the main spots to visit around Echigo-Tsumari and you can see some art works outside the museum. It was a place I definitely wanted to visit when I came to Echigo-Tsumari.