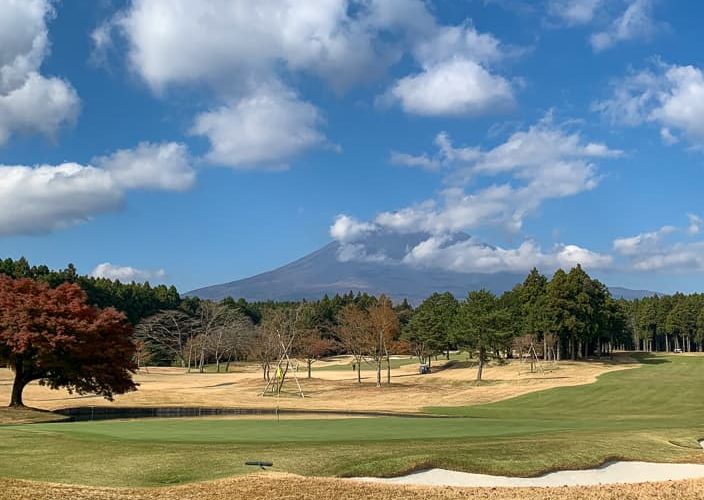 It must be one of Japan’s most beautiful course that always a regular in the world popularity ranking, spread out at the foot of Mt. Fuji the symbol of Japan. Many enthusiastic players at home and abroad would love to play in at least once.

The course has gained fame for hosting “Mitsui-Sumitomo Visa-Taiheiyo Masters”, every year where some of the greatest players in the world won the games; foreign participants such as Seve Ballesteros from Spain, Lee Westwood from England; Japanese popular professionals in the old days such as Masashi Ozaki, Tsuneyuki Nakajima, more recently Ryo Ishikawa, and Hideki Matsuyama.

We would never forget the last year’s 48th tournament final when Jinichiro Kozuma finally finished the 18th hole with an amazing eagle to turn a one-shot behind into his first win.

There was another super shot attaining an amazing eagle on the 18th hole, which has still kept a strong impression to people around the world. Twenty years ago, the country team-match “World Golf Championships (WGC)” was held on this course, which also celebrated the centenary of Japan’s golf history.

Tiger Woods, who was at the height of his popularity, No1 in the world ranking at the time with winning four major games in a row, participated in the match as an American team together with his ally David Duval. Besides, Tiger was facing a desperate situation as he entered the final hole two strokes off the lead.

Who could have predicted that? A miraculous chip-in eagle on the third shot he brought to the play-off along with the top team with extreme tension! The crowd burst into a huge cheer, it was also here that Tiger hit one of the greatest shots in the golf history, which people would talk about for a long time.

Who knows why he is always able to perform such a sensational drama like this on the greatest stage of all?  This is Tiger, his unparalleled strength at most critical moments convinces us of his genius and exceptional popularity.

In the meantime, it is the 17th hole that is as impressive as the 18th.

The downhill short hole symbolizes locality of Gotemba owing to a large signature pond which reflects the appearance of Mt. Fuji towering behind on the surface.

However, the green, surrounded by intimidating big pond and bunkers, will be even more difficult to attack, once the complex wind blow down from Mt Fuji. Many a great game has been played on this short hole where it is said that a winner never fails to get along with this place before moving toward the final hole.

I, the author of this blog also observed a kind of drama that a friend of mine hit his memorable first “hole-in-one” shot last year. Of course, my friend was impressed, but thanks to the excitement and energy from him, I also got pars at the 17th and 18th in a row, which eventually led me to closing a satisfactory unforgettable round of the play. The sacred mountain worship may have something to call a miracle.

In 2018, the course was totally refurbished with aim at becoming one of the best courses in the world under the joint direction by Rees Jones (Son of Robert Trent Jones), a well-known designer of major pro-tournament holding course such as the US Open courses refurbishment, and Hideki Matsuyama, who knows all about the world’s major tournament courses and has won here twice.

What is noteworthy is that this modification emphasizes not only the distance but also the strategic nature, as changing the position and shape of hazards to increase the difficulty level as well as the layout to pursue a beautiful course construction so that Mt. Fuji would look more elegantly.

Those who visit here must acquire high customer satisfaction achieved not only by the well-maintained course and clubhouse but by high-quality services such as well -trained caddies, restaurant staffs and meals.

Why don’t you also experience some miracle in the world-class Taiheiyo Club Gotemba Course, which has created many famous scenes in the golf history and has attracted many fans all over the world?