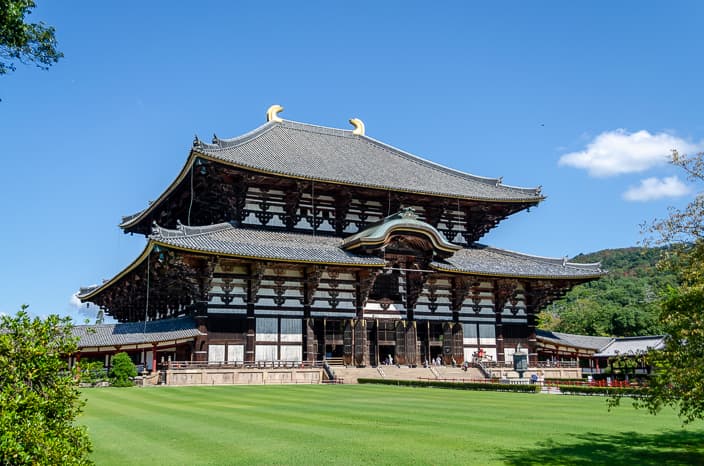 Todaiji Temple, which is extremely popular and well-known as a tourist destination in Nara, is located on the grounds of Nara Park, just like the Kasuga Taisha Shrine. For the first time in a while, I’ve returned to Todaiji Temple so I would like to introduce it.

Todaiji Temple, known as “The Great Buddha of Nara,” is a typical temple of the Nara period. The Great Buddha Hall is actually the largest wooden structures in the world. When you ask Japanese people “Speaking of Nara?”, most people answer “Big Buddha!”

The official name of the Great Buddha of Nara is “Rushanabutsu”. It was created by Emperor Shomu in A.D.743 for the happiness of all living things, including animals and plants, for the people suffering from political changes and famine.

If you want to know Kasugataisha Shrine, please read this post

When I was walking toward the Great Buddha Hall at Todaiji Temple, the first thing that appeared was Nandai-mon (Great South Gate). I was overwhelmed by its size.

This was rebuilt during the Kamakura period and is designated as a national treasure. The height of the gate is more than 25 meters, and it is the largest mountain gate in Japan.

“Kongo-rikishi statues (known as Ni-ō (Two Kings) of Tōdai-ji)” are enshrined on the left and right of Nandai-mon. When facing the gate, the left side is the “Agyo statue” and the right side is the “Ungyo statue”. The characteristic of Todaiji is that it is the opposite of the general layout.

Unfortunately, this is not the original, it was rebuilt during the Kamakura period, yet this is also a national treasure. In fact, a surprising fact was discovered during the recent dismantling and repair work: it was said that Unkei and Kaikei, the Buddhist priest in the Kamakura period (A.D.1203), and his disciples both built those statues in just 69 days – wow!

The size of each statue is 8.4 meters, which is impressive. Since the upper body is considerably larger than the lower body, you can see a harmonious appearance when looking up from below.

If you walk further through the Namdae-mon, you will see the Naka-mon (Central Gate). Beyond that is the Great Buddha Hall.

You can enter the Great Buddha Hall by paying the admission fee. The world’s largest wooden building is enshrined. The weather was fine on that day, and the symmetrical Great Buddha Hall looked even more beautiful.

When I entered the Great Buddha Hall, I was able to meet “The Great Buddha of Nara”. With a sitting height is about 15 meters, its presence is outstanding. The Great Buddha was restored many times during the Nara, Kamakura, and Edo periods because it had been damaged by many battles. The era of restoration is different for each part.

You can also go behind the Great Buddha and in one of the large pillars, you will discover a hole with a size of 30 cm x 37 cm, which is the same as the Great Buddha’s nostril. It is said that if you can go through the hole, your wish for “no illness” will come true – this is one of the main attractions of the Great Buddha Hall!

I want to imagine a new tradition, that… if you can pass through the hole, all your Golf balls will be able to land safely in the hole all the time!
What do you think of this new superstition, just for Golfers?

*** For the time being, we have stopped “drilling holes” to prevent COVID-19.

In addition, many national treasures such as Hokke-do (Sangetsudo) which are the oldest in Todaiji, Nigatsudo, and Todaiji Museum, are there. The cultural assets of Todaiji Temple are so precious that it takes a whole day to go around Todaiji Temple. Please feel the history of Japan to your heart’s content at Todaiji Temple.