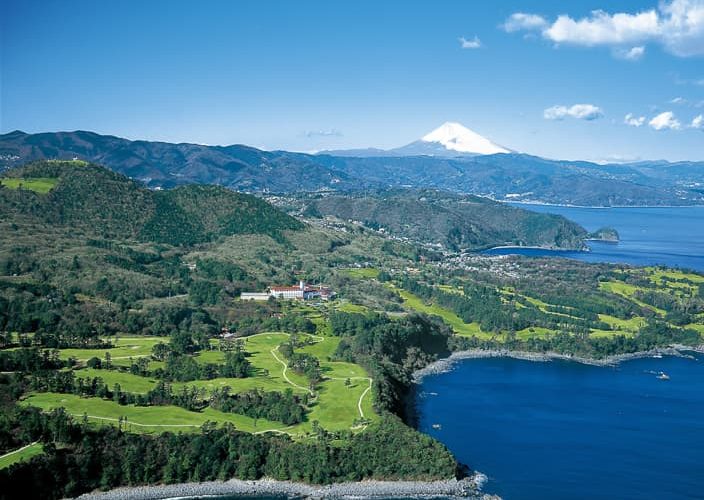 “Kawana” I think there are many golf lovers who feel a special feeling for this sweet name.

Surrounded by the sea and greenery, the elegant resort hotel with 90 years of history and the dynamic and breathtaking golf course that makes use of the natural terrain is a longing course that you want to play once.

“Fuji Course” is a famous course that represents Japan and continues to be selected as the best course ranking in the world, including the US golf magazine “100 Golf Courses in the World”. along with Turnberry in Scotland, which boasts one of the most scenic spots in the British Open Course, and Pebble Beach in US, which is said to have been created only by God and has held the US Open six times, it is famous around the world.

The Kawana Hotel Golf Course was founded by Baron Kishichiro Okura, the second generation of the Okura Zaibatsu (Plutocrat), who left a big mark in the hotel industry such as the establishment of Hotel Okura.

He bought a vast ranch site, dreaming of recreating the aristocratic rural life he encountered while studying in England, when he visited Kawana which is a restful, natural and warm place.

However, the scenic and varied land was a lava plateau that was not suitable for a ranch, so it was converted to a golf course.

In an era when there was no heavy machinery, he used a lot of human power to make a large amount of soil dressing and put up grass. First, he opened the Oshima course with 18 holes par 68 in 1928, designed by golf mogul Mitsuaki Otani. and continued to build the Fuji course in the adjacent land with the design of Rokuro Akaboshi, who was very popular at the time.

An unexpected situation happened then, British C.H. Alison, a great golf course designer, came to Japan in 1930 for the purpose of designing well-known courses both the Tokyo Golf Club and the Hirono Golf Club.

Alison was asked by Mitsuaki Otani to revise the drawing of the Fuji course drawn by Akahoshi, and when he stopped by Kawana on his way to the Hirono in Kansai, he was fascinated by the beauty of this area.

There is still an anecdote that he did not work for three days after he arrived, writing to a friend, “I may be dazzled by the beautiful scenery and make a mistake in designing correctly, so I have to wait for the impression to fade.”

The magnificent view of Oshima island, Miura Peninsula, and Mt. Fuji overlooking the wavefront of Sagami Bay below was a suitable stage for realizing Alison’s design concept.

The Fuji course was completed in 1936 based on Alison’s drawings.

The first hole (409 yards par 4) will be dynamically downhill toward the sea to give a hint of the drama that is about to begin. The 7th hole (330 yards par 4) is also an impressive hole with a narrow fairway like the back of a horse protruding toward the sea and a number of Alison bunkers leading up to the green.

And it is back nine holes that makes Kawana’s impression stronger and more memorable.

The 11th long hole (568 yards par 5) heading to the symbolic white lighthouse at the tip of the cape with a view of Mt. Fuji on the left and Sagami Bay on the right, the 14th hole (366 yards par 4) attacking the green like a stage floating on the sea.

The most thrilling and impressive signature hole is probably number 15 (470 yards par 5). From the tee ground on the hill, it is downhill toward the narrow fairway that leans toward the sea along the cliff as if it were launched into the ocean. These are probably Alison’s most focused holes, strongly fascinated by the beauty of the cliffs of Cape Kawana, which protrudes into the sea.

The 16th short hole (172 yards par 3) that launches a steep slope toward a small green above the hill. The 17th hole (388 yards par 4), which is said to be the most difficult, has a height difference of nearly 30 yards, and a deep and huge Alison bunker awaits in the middle of the fairway and in front of the green. The three holes from 15th are called Kawana’s amen corners (holes that pray to God), and they have produced many dramas even in pro tournaments.

The distance is not so long, but the handmade course that skillfully utilizes the natural terrain always has large slopes and swells. In addition, the design technique of skillfully arranging the Alison bunker, which is deep and has a high jaw on the small and elevated green, to increase the difficulty level, and the Korai turf green, which has a tight grass due to the influence of the sea breeze, make the course difficult.

Currently, in the pro tournament, the 18th hole (342 yards par 4) is used as the 1st hole, and due to the convenience of TV image and the installation of a temporary grandstand for watching games, this most difficult 17th hole is the final hole, creating a dramatic scene.