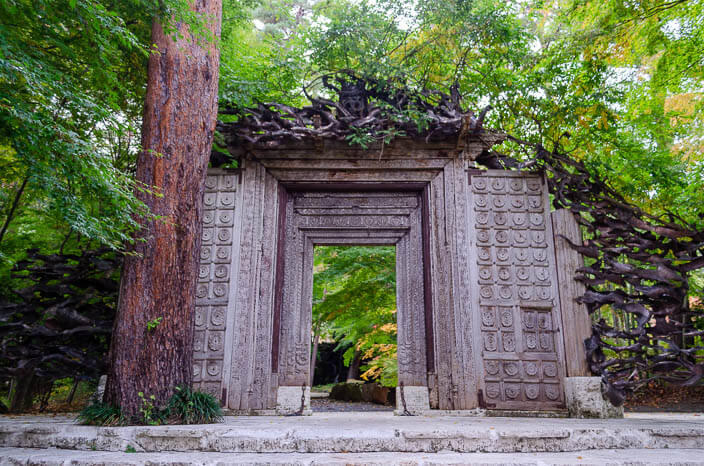 About a three-minute drive from Oishi Park on the shores of Lake Kawaguchi, there is a museum that exhibits works that go beyond the boundaries of kimono. This is the Itchiku Kubota Art Museum, which has three stars in the Michelin Guide. When I visited, I understood the reason it got such a high rating.

Tsujigahana-dyeing is a dyeing method that flourished from the Muromachi period (1336-1573) to the Azuchi-Momoyama period (1573-1603). It is a pattern dyeing technique based on shibori (tie-dyeing) with painted pictures. It was first used for common people as kosode (the base of kimono), and in the Azuchi-Momoyama period, it was loved by many warlords and samurai families.

Tsujigahana suddenly disappeared in the early Edo period (1603-1868), and is therefore called a “fantastic technique”. It is speculated that the reason for the decline of Tsujigahana is that in the Edo period, Yuzen (another dyeing method) flourished and overtook Tsujigahana in popularity.

Itchiku Kubota, a kimono dyer, was born in Tokyo in 1917.

When he was 20 years old, he saw a kimono dyed with Tsujigahana-dying at a museum and thought, “This is wonderful! This technique must be preserved!”. He then devoted himself to researching Tsujigahana technique, that had already been lost at that time, with the aim of not only recreating it but also establishing it as a technique that could still be used today. However, at the age of 27, he was drafted into the Pacific War and was interned in Siberia after the war.

Three years after his internment, at the age of 31, Itchiku was able to return to Japan and while working as a Yuzen artist, he spent the income he earned on researching Tsujigahana. However, It was not until he was 40 years old that he was able to engage in full-scale research on Tsujigabana. And in 1977, at the age of 60, he completed his own style of Tsujigaoka, “Itchiku Tsujigahana”. He was awarded the Chevalier of the Ordre des Arts et des Lettres from the Government of France in 1990.

From November 1995 to April 1996, he had a long-term solo exhibition at the Smithsonian National Museum of Natural History in Washington, D.C., the largest museum in the United States. This was the first time that a living artist was exhibited at the Smithsonian Institution.

This is Itchiku Kubota’s long-cherished wish, in an ideal location overlooking Lake Kawaguchi and Mt. Fuji. It was built with many interruptions due to lack of funds but finally the main building opened in October 1994, and a new building opened in July 1997. The dual themes of the museum are “the trinity of man, nature and art” and “a place of new culture and art”.

Not only the artworks but also the entire museum, including the garden and buildings, represent the “world of Itchiku”.

This is the main entrance to the museum. The door that appears in the red pine forest is a relocated gate from an old Indian castle.

After passing through the gate and walking for a while, you will see the new building. Itchiku Kubota, a fan of Antoni Gaudi, created this building in the image of Güell Park in Barcelona, Spain.

The “main building” can be seen in the front. It is a pyramid-shaped building with an image of Mt. Fuji. The exhibits change several times a year, but there are usually about 20 pieces of “Itchiku Tsujigahana” on display. Photography is not allowed in the museum, so I regret that I cannot introduce the works… They are so beautiful!

By the way, people in the Azuchi-Momoyama period were so full of love for flowers that they felt happy when they saw flowers blooming on the roadside. At that time, people called roadside “tsuji”, so “tsuji-ga-hana” means “flowers on the roadside” as the name says.

When I looked at the works of Itchiku Kubota, I strongly felt that they contained the message from Itchiku that “ordinary things are happiness.”
I was overwhelmed by the tremendous artistic quality of his works, which were inspired by nature, such as flowers and grasses, Mt. Fuji, sunrise and sunset.

I had seen kimonos many times before, but even when I saw beautiful kimonos, I only thought of the colors and patterns. It was the first time that I felt such a strong message when I saw a kimono, and I was filled with an inexpressible emotion. The work of Itchiku Kubota is not a kimono, but an artwork using a kimono as a canvas!

Why don’t you go and receive the message of Itchiku Kubota from the entire museum?