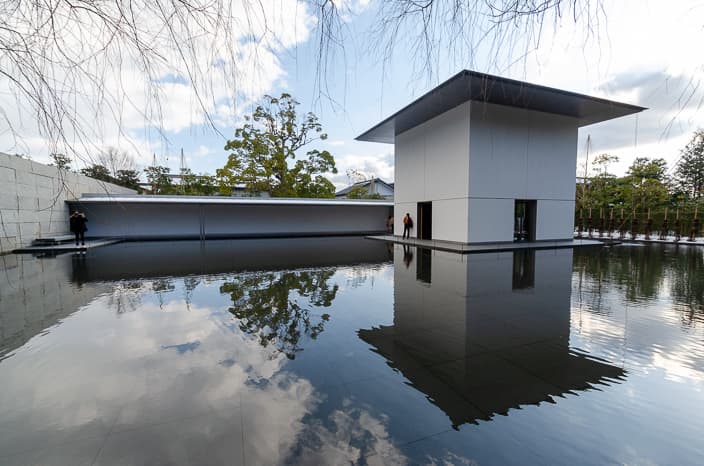 D. T. Suzuki (1870-1966) was a Buddhist scholar and doctor of literature from Kanazawa, Ishikawa Prefecture, Japan.

He is known for spreading abroad the frontiers of Asia, Zen and other forms of Buddhism, as well as Eastern and Japanese cultures & thoughts. With his cross-cultural work, he has influenced many people and twenty-three of his approximately hundred books were written in English.

Among many other people, Steve Jobs was also influenced by the philosophy of Zen, after encountering a book at his university library.

The D.T. Suzuki Museum was designed by Yoshio Taniguchi, the son of anchitect, Yoshiro Taniguchi, born in Kanazawa, Ishikawa Prefecture. Yoshio Taniguchi is a world-renowned architect who designed “MoMA” (Museum of Modern Art, New York), “GINZA SIX”, and many other famous buildings in Japan and internatinally.

In Kanazawa, the “Kanazawa Architectural Museum in Commemoration of Yoshiro Yoshio Taniguchi”, a tribute to his late father. Like other Yoshio Taniguchi buildings, it has a nice, simple, lean design.

The world of Daisetsu Suzuki is presented in an idyllic setting that is typical of Kanazawa, yet with a definite modern feel: landscaped gardens incorporating stone walls and streams set against a background of vivid greenery sloping down from the nearby Kodatsuno plateau.

The museum consists of :

Three wings connected by corridors: an Entrance Wing, an Exhibition Wing and a Contemplative Wing,

Three gardens around the building: the Vestibule Garden, the Roji Garden and the Water Mirror Garden.

Visitors can learn about the philosophy of Daisetz Suzuki and engage in their own contemplation as they move through the wings and gardens.

① “Exhibition space” to learn about D.T. Suzuki: A place where visitors can deepen their knowledge of D.T. Suzuki himself through his photographs, interviews, and the words of his student, Mihoko Okamura.
② “Learning space” to study the mind and thoughts of D.T. Suzuki: Library where you can read D.T.’s books and other related books.
③ “Contemplative space” where each person thinks for themselves: what they think and how they spend their time is left up to the visitor.

Photography is not allowed in the “Exhibition Space” and “Study Space,” so only the “Contemplative Space” is introduced here. Upon entering the “contemplation space,” you will find only a simple tatami chair. Here you can spend your time as you wish, sitting on a chair and looking at the water basin, or take off your shoes and lie down on the tatami mats.

When I visited, I was struck by the beauty of the shimmering reflections of the ceiling’s well-lit lights on the walls. The lighting is artificial, but the reflected light would not be possible without nature, such as sunlight. In the words of D.T. Suzuki, “Happiness with nature, which is beyond human control”.

One of the highlights of D.T. Suzuki Museum is this “Water Mirror Garden” (the white building that seems to float in the middle is the “Contemplative Space”).

The quiet atmosphere, simple architecture, and occasional ripples make you want to keep looking at it. Here, I became aware only of the scenery and phenomena in front of me, such as the changing sky and the occasional ripples, and I felt as if I was “just here. I don’t have a deep understanding of Zen, but I felt like I was able to become a little more detached, and I think I learned a little about the heart of Zen…. If you have any worries, I recommend you to go here and be in a daze!

Even if you are not particularly interested in Zen or philosophy, coming just to see beautiful architecture, to be surrounded by silence, or to relax, the D.T. Suzuki Museum will accept you.

Just being there mindfully will cleanse your mind, so please visit, when you are sightseeing in Kanazawa.