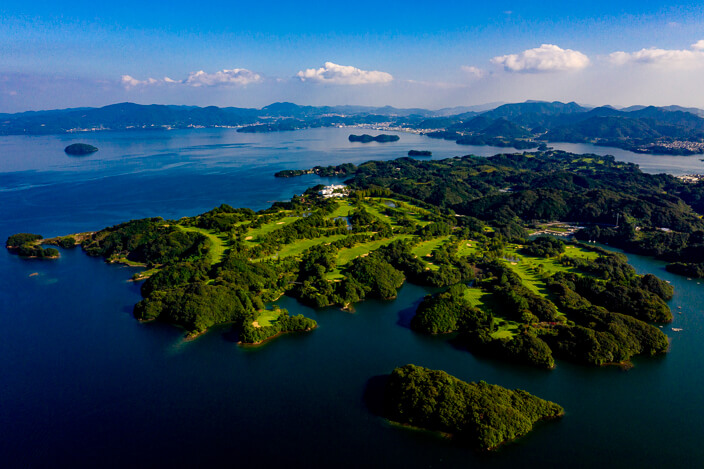 I was finally able to play at “Passage Kinkai Island golf club” which is said to be the most memorable of all the courses that my friends who have a connection with Kyushu, Western part of japan.

No one in golf lovers knows this fascinating name, and now it has become a regular in various golf course popularity rankings as one of the best seaside courses in Japan.

The seaside course that juts out into the sea from the Omura Peninsula in Nagasaki Prefecture is surrounded by the sea on three sides, and it feels like playing on a course that floats on the ocean. Due to this special landscape and scenery, it was selected as the best course in Japan with a beautiful sea and pond.

The origin of this fashionable name is that the etymology of the passage means “path” or “passing” in French, and especially in Paris, it means “a comfortable and fashionable walking path for pedestrians”.

What is the meaning following the passage, “Kinkai” is another name for Omura Bay, where the course is located. Omura Bay is a sea bay that spreads like a lake in the center of Nagasaki Prefecture and although it is about half the size of Lake Biwa, it has a small opening connecting to the Goto-nada Sea, making it an ultra-closed sea area that is rare in Japan.

Therefore, it is called “Kinkai” because the waves gently hitting the beach in the bay are likened to the sound of a koto, and one theory is that it was named by the Han scholar “Rai Sanyo” in the Edo period. What a sweet and fashionable name!!

The day I visited was cloudy with the afterglow of rain until the night before, but the sunlight shining through the clouds twinkle like dancing on a ripple above the beautiful and calm sea that can be seen from the large window of the clubhouse. The silence of the sound of water droplets gave us a hint of today’s wonderful round.

However, this picturesque course is a full-scale champion course with a total length of over 7,000 yards including three sea crossings, and major tournaments such as the Japan PGA Championship in 2010 and the Japan Ladies Professional Golf Championship in 2015 were held.

The course was designed by Yoshimasa Fuji, who has the nickname of “Genkai no Arahoshi,” （Rough Master of Genkai-sea）and he is a well-known player who has been active mainly in Kyushu and has won many titles such as the Japan Open and Japan Senior Pro. In addition, he has been inducted into the Japan Professional Golf Hall of Fame in recognition of having nurtured many younger generations such as Jumbo Ozaki, a legend who won a total of 94 domestic tours and won 12 prize money kings.

By the way, among the three holes that cross over the sea on this beautiful seaside course, the most striking signature hole is probably the 3rd hole (184 yards, par 3), which looks like it’s floating in the spectacular ocean.

The tee ground is located on a hill overlooking the sea at your feet, and you can aim for a green like a small island about 10 yards or more below. It is also important to know the influence of the sea breeze, and if you are anxious and give up your limbs, it will be difficult for even an advanced player to catch the green.

Even in Japan, there are many courses where greens float in ponds, but I have never seen greens floating in the sea (although it is actually a peninsula). Overseas, I can remember the 3rd short hole of the Mauna Kea Resort Hotel Golf Course on the Big Island of Hawaii, which is also a famous course designed by Robert Trent Jones and is one of the most beautiful and popular courses in Hawaii. Another course I remember is the 7th short hole of the Pan Pacific Hotel (formerly Meridian Hotel) Nirwana Golf Course in Bali, Indonesia. This is also a beautiful course designed by Greg Norman and overlooking the Indian Ocean and Tanah Lot Temple floating there, which is said to be the most scenic course in Asia, but it seems that it is currently closed due to renovation work.

By the way, if you hit the tee shot on the 3rd hole and then cross the bridge to the island, you will be surprised that the green is much larger than you can see from the tee ground. But, you can’t be relieved if the tee shot caught the green. It is a two-tiered green with a small hill in the center of the green, so it is difficult to put because the undulation is tight throughout. In fact, I was the only one in the party who made one-on to the back of the green, sure enough I made a three-putt.

The next 4th (524 yards, par 5) is a difficult long hole (HDC1) with a left dogleg and uphill continues to the green. The sea approaches on the left side and a cliff enters the center of the course in front of the green and slopes toward the cliff. There is no cross bunker, but a large guard bunker is hidden behind the green.

The 8th hole (143 yards, par 3) has a large pond until the green, but for safety, if you select a large club and put it in the two large bunkers in the back, there is a high risk that the next shot will enter the pond. Also, the large horizontally long green has tight undulation, so the putt aiming at the cup may flow in an unexpected direction. therefore careful putting is required.

The 9th (419 yards, par 4) is the middle hole with a long distance with a pond in front of the tee ground, and although the entire course is inclined to the left. But,cross bunkers line up on the right side and there are only a limited number of places to aim for a tee shot. Furthermore, in front of the green, there is a running water channel, and it is difficult to select a club to aim for 2 on or lay up.

In the second half, 16th and 17th are valley crossing holes. The 16th (381 yards, par 4) is a difficult hole with a water-filled cove in front of the tee ground, which requires a carry of 150 yards or more to the fairway, and even if you cross it at the last minute, it may even return to the cove in front of you. From the point where you hit the second shot, it is a downhill that turns to the left, and the relatively small green is well guarded by four bunkers.

The 17th hole (159 yards, par 3) also needs to cross a large valley, and two large bunkers await beyond the valley, and the green is vertically long and there is a deep cedar forest in the back, so it is difficult to judge the sense of distance.

Finally, the 18th (522 yards, par 3) is the last beautiful hole welcomed by the pond. However, a dogleg to the left from the second hit point, a large pond continues along the left side, and an accurate sense of distance and direction are required to aim at the green, also the skill and strategy of the player are tested on every shot.

After finishing the round on a difficult course, you can enjoy Nagasaki’s specialty dishes using fresh local ingredients while overlooking Omura Bay at the wonderful clubhouse restaurant with large windows like a cruise ship. Among many delicious menus, “Black Champon noodles” (Dish of noodles using squid ink with sea food and vegetables etc.) is popular, so I recommend you to try it.

In addition, the adjacent resort hotel has a pure white exterior that shines in the blue sea view and gives you a feeling of the Mediterranean coastal resort and you can enjoy the gorgeous facilities such as restaurants where you can taste seasonal ingredients, swimming pools, private beaches, beauty salons and spas. So that, it ranks high in the ” Golf course ranking that you can enjoy even if you stay overnight”

The road from Nagasaki city to the course runs through the peninsula, so it takes time, but since Nagasaki Airport is in the same Omura Bay, the resort and the airport are connected by a high-speed boat dedicated to the course for about 30 minutes.

Enjoy the extraordinary golf leisure where you can spend a relaxing time while gazing at the beautiful sea at the ocean resort where you can visit directly from the airport by a comfortable high-speed boat across the sea without going through the bustle.