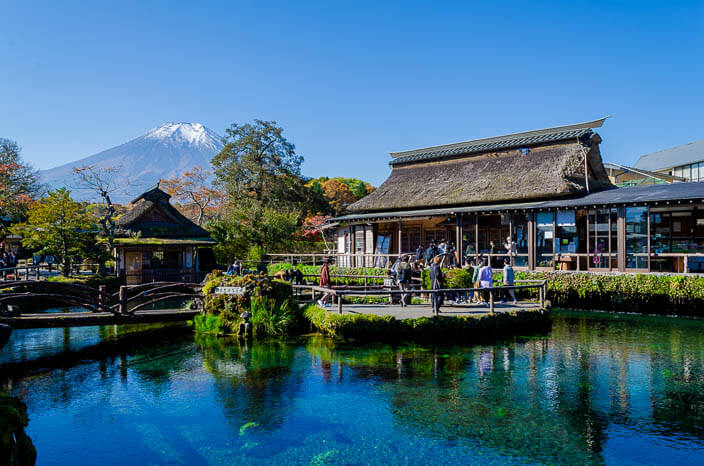 Oshino Hakkai, located between Lake Yamanaka and Lake Kawaguchi, is a power spot where you can enjoy the mysterious spring water ponds along with beautiful views of Mt. Fuji.

These have been called “Fountain of the Gods” since ancient times, and are also known as power spots because of the powerful view of Mt. Fuji. In the Edo period (1603-1868), it was a pilgrimage site where people came to purify themselves before entering Mt. Fuji.

Deguchi-pond is the largest of the Hakkai. It is a place where you can relax and appreciate nature as it has been since ancient times. However, I couldn’t go there because it is one of the furthest places in Hakkai (about 20 minutes walk).

This is the smallest of the eight Oshino Hakkai springs, but it is also known for its depth of 4 meters. This windmill is the landmark.

Sokonashi-pond is the most ancient pond in Hakkai. It is said that the water vein is connected to the Okama-pond underground the earth.

There is a legend that if you try to wash vegetables in the pond and drop them into the pond, they will be swept away by the water and disappear.

It was named “Choshi-pond” because it resembles the shape of a sake choshi (sake bottle). There is a sad legend that a bride who farted loudly during her wedding ceremony threw herself into the pond out of shame, with a choshi (sake bottle) in her hand .

This is the representative pond of Oshino Hakkai, and features the largest amount of spring water at 2.2 cubic meters per second. In 1983, NASA used the water from this spring pond to conduct an experiment to make snow in space.

This is a small spring with a depth of about 50 cm, adjacent to the Waku-pond. Although it is called “Nigori (muddy) -pond,” the water is crystal clear because it is well water from a water mill. This pond also has a legend that a shabby ascetic asked for a cup of water at the eaves of the landowner of this pond, but was refused, and the pond water suddenly became muddy.

Fuji is reflected in the water like a mirror, hence the name “Kagami-ike” (Mirror Pond). There is (again) a legend that this pond can distinguish between good and evil.

Yellow irises grow wild and bloom beautifully in early summer. If the weather is good, you can see the majestic Mt. Fuji. There is (yet another) legend that if you wrap irises from this pond around your body, your illness will be cured!

Near the souvenir shop, there was a large pond that caught my attention as the view of Mount Fuji from there was beautiful.

I thought this was one of the eight seas, but I was told that this was a man-made pond called Naka-ike. It is as beautiful as the Hakkai, so it is worth a visit. There is a spring in the middle of the Naka-pond, and its beautiful deep blue color that makes you swoon. The reflection on the surface of the water makes it look like a mirror, so some people take commemorative photos here. I recommend taking pictures from the other side to get a better reflection!

On the way to the spring mouth, there is a famous spring water that anyone can drink. You can even take it home in a plastic bottle.

This is a manhole of Oshino Village that I found at Oshino Hakkai. The manhole depicts the actual scenery ! It’s just like Oshino! As a side note, manholes in Japan have different designs depending on the region, so it’s interesting to pay attention to them.

The beauty of Oshino Hakkai cannot be conveyed in a photo, please come and see for yourself!